What is a Box Plot?

Box plots are used to better understand how values are spaced out in different sets of data. To understand the method behind constructing a box plot, imagine a set of values that are spaced out along a number line. First, draw a line at the median of the data set — the value in the set which divides it evenly in half, with an equal number of points smaller and larger. If there are an even number of points in the dataset (as in the example below), the median is halfway between the two central points.

Next, divide each half of the dataset in half again, dividing it into four even sets of points. These four sections are called quartiles. The leftmost line marks Q1, the first quartile, while the rightmost line marks Q3 or the third quartile (the median can also be called Q2).

Every box plot has lines at Q1, the median, and Q3. The other major feature of a box plot is its whiskers, which can be drawn using a few different methods. Chart Studio offers three methods, which you can switch between under Style → Show Points.

Whiskers With All Points Visible

To draw the whiskers when all points are displayed, Chart Studio first calculates the interquartile range (IQR), which is the distance between Q1 and Q3. Next, we look at a subset of the data, ranging between 1.5 × IQR below Q1 and 1.5 × IQR above Q3 (anything outside of this range is called an outlier). We then draw lines at the smallest and largest point within this subset. These lines define our whiskers.

Whiskers With Only Outliers Visible

If you ask Chart Studio to only display outliers, the whiskers remain in the same spot, but only the outlier points are drawn. This is a common view for box plots. In the example below, even though most of the points aren’t drawn, we still know quite a bit about this data set. How might you describe it, just from the box, whiskers, and outliers? Often this display gives us all the information we need, and showing every single point would be distracting.

Whiskers with No Points Visible

You can also show no data points at all on a box plot. In this case, the whiskers are drawn differently, but they’re quite simple. Just draw one whisker at the smallest data point, and another and the largest.

Too Many Points: Jitter

Sometimes when viewing all data, the points become stacked on top of each other and it’s difficult to see their individual values. In this case, the points can be “jittered” in Chart Studio, or moved away from the number line a random distance between 0 and a value of your choosing.

You might also need to jitter the points if values are not continuous, but fall at regular intervals (a box plot representing points scored in football games, for example) since data points might be stacked directly on top of one another.

How to Read a Box plot

First of all, while it was useful thinking of bo xplot data as lying on a number line, it’s more common to see box plots rotated vertically (this is how Chart Studio displays them). 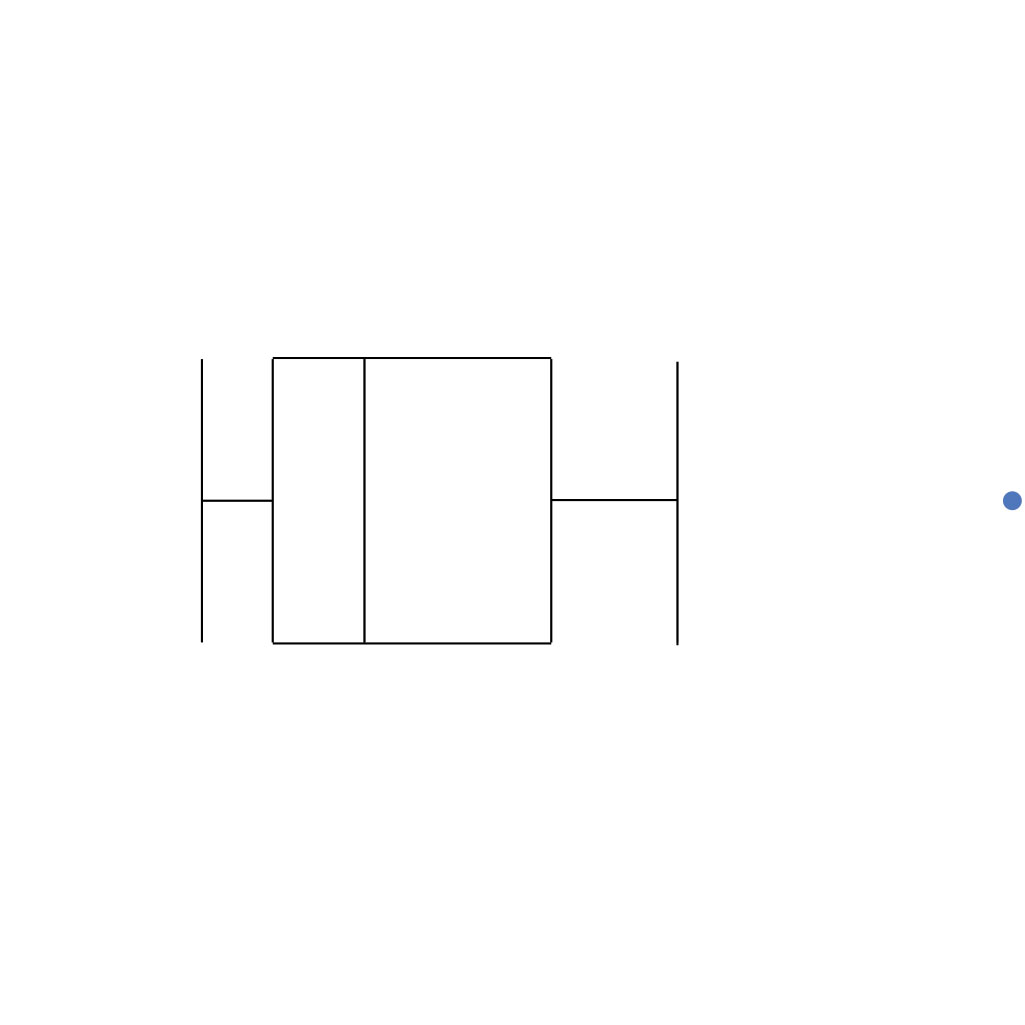 So far, we’ve looked at box plots for a single series. Graphs such as histograms give a more complete picture of a single series, but the real strength of a box plot is comparing multiple series at a glance. Take the example below, showing hours slept for each day of the week, for a group of 20 high school students. 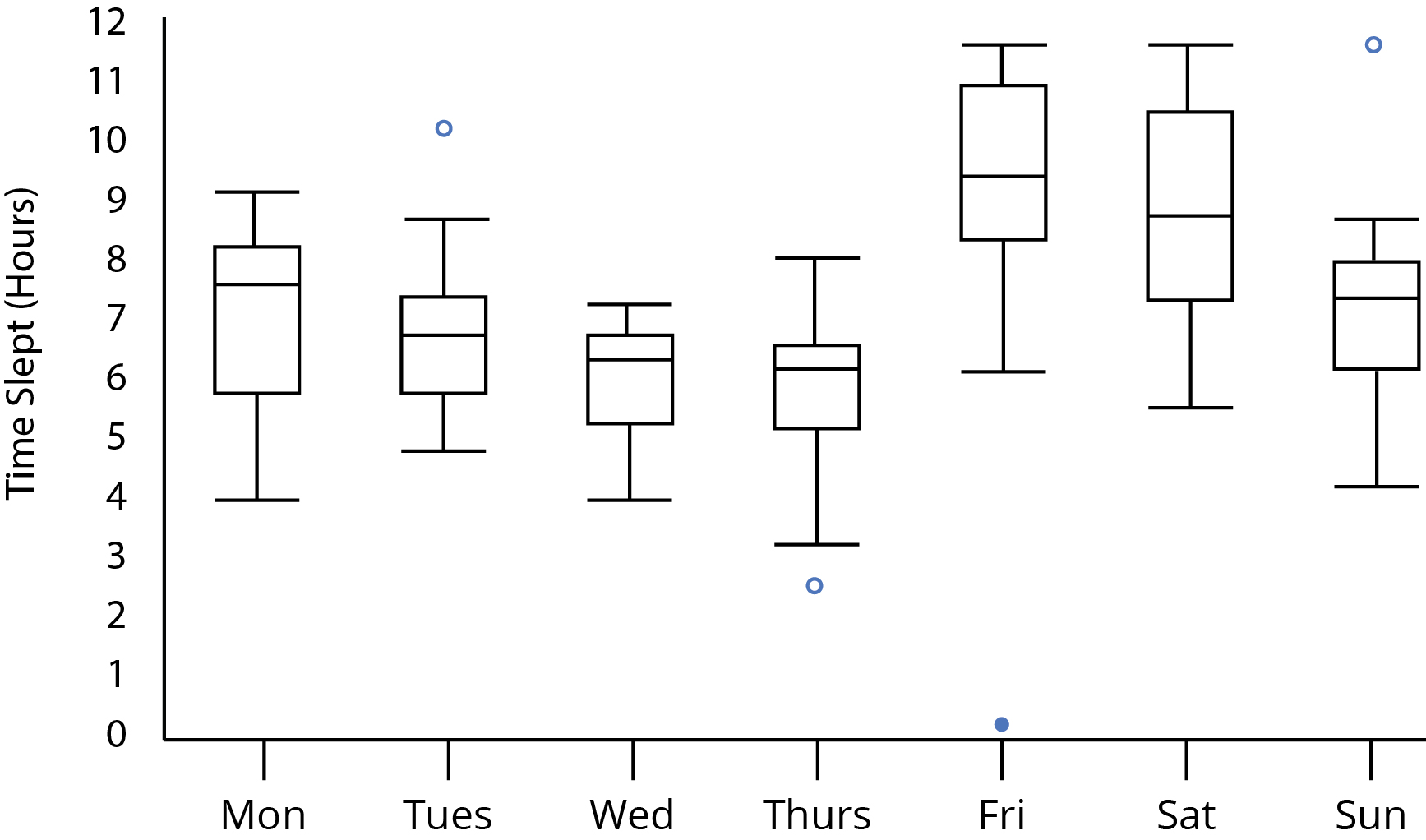 Box plots show so much information, it’s useful to examine this one feature by feature.

To get a sense of the general difference between the days, we can look at the changes in median values. 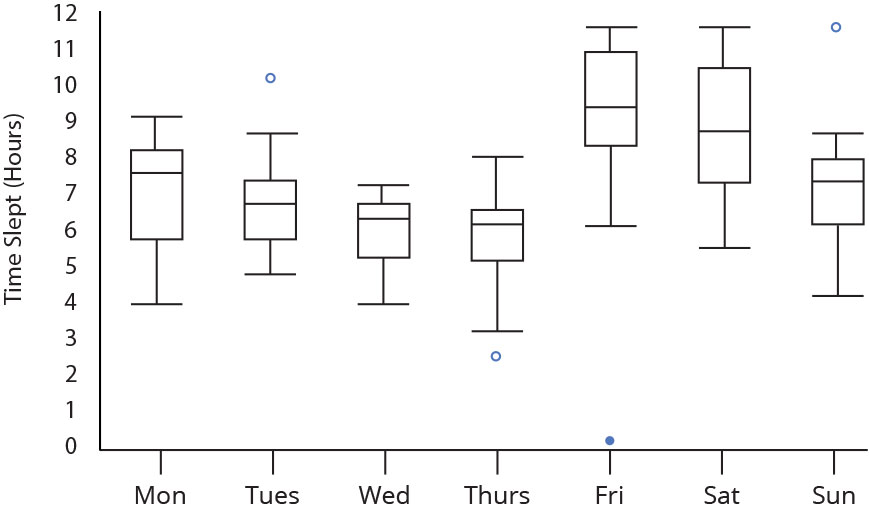 Overall, the students sleep less and less as the week goes on, then they sleep more on the weekend.

The Boxes and Whiskers

While the boxes and whiskers show the same overall trend as the medians, they also contain much more information. Some example information you could draw from the boxes:

On a box plot, the outliers stand out and seem important. While they’re interesting, remember that they are kept separate because they are different from the overall trend, and shouldn’t be used to make generalizations. These outliers only represent 4 out of 140 total data points! It’s OK to say “one student barely slept on Friday night” but NOT OK to say “on Fridays, students barely sleep”.

What Type of Data Belongs on a Box plot?

Usually, box plots are used to compare multiple different series of data. It’s perfectly valid to create a box plot for one series, although a histogram might give a more complex or complete picture of the data. Some examples of data sets to compare:

You should also make sure that the data in each series follows some guidelines: